[ Instrument R & D ] On April 16th, according to foreign media reports, engineers at the Massachusetts Institute of Technology (MIT) have developed a method that can use sensors made of carbon nanotubes to closely track how plants respond to such things as injuries, Pressures such as infection and light damage. These sensors can be embedded in the leaves of plants and report hydrogen peroxide signal waves in them. 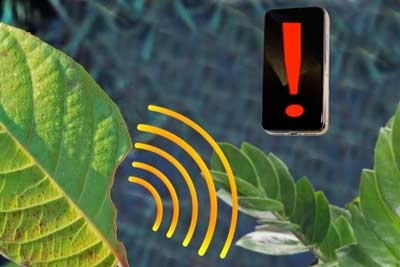 Chemical engineers at the Massachusetts Institute of Technology have designed a sensor that can be embedded in the leaves of plants and measure the level of hydrogen peroxide, indicating that damage has occurred. The signal can be sent to a nearby smartphone. (Image: Felice Frankel)
Plants use hydrogen peroxide to communicate within their leaves, send out distress signals, and stimulate leaf cells to produce compounds that help them repair damage or defend against carnivores such as insects. New sensors can use these hydrogen peroxide signals to distinguish between different types of Stress and different kinds of plants.
Michael Strano, a professor of chemical engineering at Carbon P. Dubus in Massachusetts Institute of Technology, said: "Plants have a very complex form of internal communication, and we can now observe this form of communication for the first time. This means that we You can see the response of living plants in real time, conveying the specific type of stress they are under. "
This sensor can be used to study how plants respond to different types of stress, which may help agricultural scientists develop new strategies to increase crop yields. The researchers demonstrated their method in eight different plant species, including spinach, strawberry plants, and arugula, and they believe that this method can work in more plants.
Embedded sensors track plant health
In the past few years, Strano's laboratory has been exploring the engineering potential of "nano-bionic plants"-this plant contains nano-materials that can give plants new functions, such as glowing or detecting water shortages. In this new study, he set out to use sensors that can report plant health.
Strano Laboratories has previously developed carbon nanotube sensors that can detect various molecules including hydrogen peroxide. Strano began to try to integrate these sensors into plant leaves about three years ago. The Arabidopsis studies commonly used in plant molecular studies indicate that plants may use hydrogen peroxide as a signaling molecule, but its exact role is not yet clear.
Strano uses a method called lipid exchange envelope penetration (LEEP) to integrate sensors into plant leaves. The LEEP developed a few years ago allows the design of nanoparticles that can penetrate plant cell membranes. When Nuo committed to embedding carbon nanotube sensors, he stumbled upon a status quo.
He said: "I am training myself to become familiar with the technique. During the training, I accidentally caused a wound on the plant. Then, I saw the evolution of this hydrogen peroxide signal."
After he saw the leaf being injured, hydrogen peroxide was released from the wound and produced a wave spreading along the leaf, similar to the way neurons transmit electrical pulses in our brain. When plant cells release hydrogen peroxide, it triggers calcium release in neighboring cells, thereby stimulating these cells to release more hydrogen peroxide.
Strano said: "Just like the dominoes keep falling, the waves it forms propagate much more than hydrogen peroxide puffs alone, and the waves themselves are powered by the cells that receive and propagate it."
Large amounts of hydrogen peroxide stimulate plant cells to produce molecules called secondary metabolites, such as flavonoids or carotenoids, which can help them repair damage. Some plants also produce other secondary metabolites that can be secreted to resist predators. These metabolites are usually the source of the food flavor we need in edible plants, and they are only produced under stress.
New sensing technology can quickly track the waveforms of eight plants and issue alarms
The key advantage of the new sensing technology is that it can be used in many different plant species. Traditionally, plant biologists have conducted many molecular biology studies on certain plants suitable for genetic manipulation, including Arabidopsis and tobacco plants, but the new MIT method can be applied to any plant.
Strano said: "In this study, we were able to quickly compare eight plants, and old tools couldn't do this."
The researchers tested strawberry plants, spinach, arugula, lettuce, watercress, and stalk grass, and found that different species seem to produce different waveforms-a unique shape created by plotting the concentration of hydrogen peroxide over time. They assume that each plant's response is related to its ability to resist damage, and that each species responds differently to different types of stress (including mechanical injury, infection, and heat or light damage).
Strano said: "This waveform saves a lot of information for each species. What's more exciting is that the stress type of a given plant has been encoded in this waveform. You can see what the factory has experienced in almost any new environment. Respond in real time. "
The near-infrared fluorescence generated by the sensor can be imaged with a small infrared camera connected to a Raspberry Pi, a credit card-sized computer that costs $ 35, similar to a computer inside a smartphone.
Strano said: "Very cheap instruments can be used to capture signals. Applications of this technology include screening different types of plants to resist mechanical damage, light, heat and other forms of stress. It can also be used to study different species. Responses to pathogens, such as bacteria that cause citrus to turn green and fungi that cause coffee rust. One of the things I am interested in is understanding why certain types of plants show some immunity to these pathogens, while others are not immune Our sensors allow us to intercept the stress signal and accurately understand the conditions and mechanisms that occur upstream and downstream of the plant, thereby avoiding shadows. "